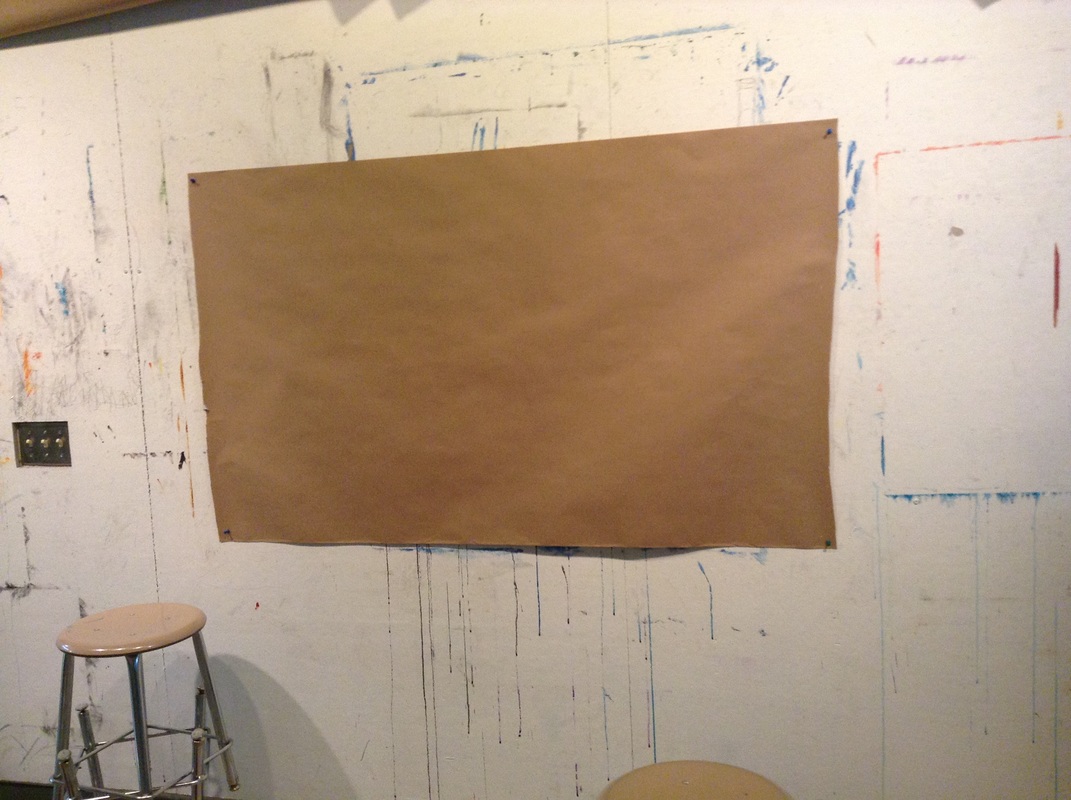 I began with this.
​ 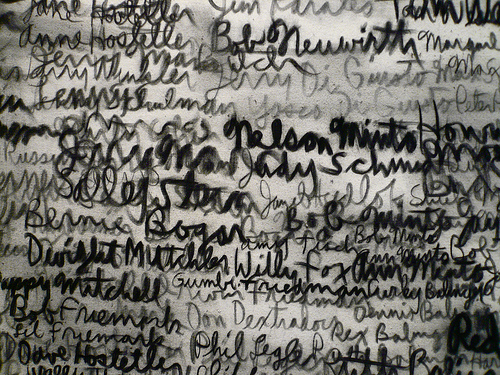 I was very heavily inspired by the Jim Dine name painting. And that started the reaction that ended in my video.

I analyzed and listened to many speeches by Alan Watts. I chose Government is a mess, an excerpt from government is unnecessary, and an excerpt from Being alive. Government is a mess completely translated what my project was trying to say. Even though it was not written for that purpose it perfectly abstracted over. The speech stated in the first line "We live under a constitution, where we are supposed to be governed by ourselves. Somebody said 'Down with democracy!..when we get it." This line is pointing out all of the contradictions in our government which was what my project was doing as well. If we live under a constitution there is no way we can be self governed. He also said in this speech "The state always wins because it's the biggest one of the bunch." That quote captures the entire speech and my project. We are told we have total freedom and in comparison to other less fortunate countries we do. But every so often we have to wonder and question if that first amendment really stretches as far as we think it does.
Religion has always been a big topic in America and still is today. And I chose an excerpt from Being alive because it starts off saying "Why talk about this? Is it interesting? Is it important?" I chose this part to be in my video because I wanted the viewers to think about that as well. I wanted them to think about why in the past and in our history it has caused such a stir up of commotion and conflict. The topic of religion means something to everyone even if that something is nothing. It is one of those things that unites us in all of our division. This speech had an opening line that was exactly the question I wanted to be in the minds of my viewers which is why should we care? After that through the video I went on to answer that question.
Lastly, I used government is unnecessary to end it out with. I used this as the ending because in this speech he talked about how we all hope that government will become unnecessary because we hope that each individual will become self governing. Towards the end of my video I emphasized individuality and how we should all be able to live in our bodies as one person and think, speak, and act as an individual. In the video I wanted to get that message across at the time he was speaking of the state vanishing I had free written in bold letters on my art piece. When he mentioned about the church vanishing all the lights went out and it was complete darkness. Abstracting, analyzing, and using Alan Watts's speeches helped me get my message across entirely. It helped bring the entire video together.

During the duration of project 4 I have researched many cases concerning the separation of church and state, and conflicts with religion. But the cases that have proved themselves as the most impactful in my research were Reynolds vs. The United States, Cruz vs. Beto, and Torcaso vs. Watkins. From the beginning of this country I have found that it's values and laws have been based off of the Christian faith. The Supreme Court of 1892 declared "This is a Christian nation." It was also recorded that John Adams had said "the highest glory of the American Revolution was, it connected in one indissoluble bond, the principles of civil government with the principles of Christianity." Discovering this information made it easier to find the reason why there have been so many court cases involving religion. How can we keep the separation of church and state alive, if it never existed in the first place?
Reynolds vs. United States took place in the year of 1890. It was one of the first religious court cases and it is one of the most important for that reason. A man who belonged to the faith of the Church of Jesus Christ of the Latter Day Saints was married to two woman at the same time. He argued that his religion required him to marry multiple women. He lost the case and the Church of the Latter Day Saints decided to revoke polygamy saying "any marriages forbidden by the law of the land shall be dissolved ." This case not only stands out because it was one of the first but also because this was a moment in time where the state's influence had caused followers of a religion to change its rules. Reynolds vs. United States made it evident that anytime the state and church did collide the state would always win. Events like this made it obvious that the government was mostly concerned about keeping the church out of the state and not keeping the state out of the church.
Next I also chose Cruz vs. Beto as another important case. In Cruz vs. Beto it put the spotlight on the factor of which "churches" were most favorable. Cruz was a petitioner prisoner and he was also a Buddhist. Being a Buddhist caused him to face discrimination inside the prison. He wasn't allowed to use the prison chapel unlike those that belonged to the Catholic, Jewish, and Protestant faith. He also wasn't allowed to write to his religious advisor. When he tried to share his religious material and spread Buddhism he was placed in solitary confinement with nothing but bread and water. Cruz won the case in the Court of Appeals. Though the right side won in this case it still puts things into perspective. It brings up the question how many times do people in America get discriminated against for not participating in a religion that has no Christian background? This case asks this very important question that most probably don't want to hear the answer to.
Finally I chose Torcaso vs. Watkins. The Torcaso vs. Watkins case was the most ground shaking  to me. In 1961, Torcaso was chosen by the Governor of Maryland to the office of Notary Public. At the time the Maryland required anyone who was appointed to declare their belief in God. Torcaso was denied because he would not say it. He sued and won his case as well  the court had said "This Maryland test for public office cannot be enforced against Torcaso because it unconstitutionally invades his freedom of belief and religion." This is the most ground shaking because a man was almost kept from a job he was highly qualified for and worked so hard to get for his belief. It's insane to think those people thought belief in God made you more qualified for a job that requires no religious duties. He was almost denied his job and his rights for something he didn't say.
I chose these three court cases because they really helped establish my motive and reasoning behind my project.

The case of Reynolds vs. United States(1878)


This case tested the limits of the first amendment and what it granted as a right and what it did not. It answered the question which is more superior, the law of the land or religious beliefs?


This case involved a member of the Church of Jesus Christ of the Latter Day Saints named George Reynolds. Reynolds took residence in Utah. Federal law stated "Every person having a husband or wife living, who marries another, whether married or single, in a territory, or other place over which the United States have exclusive jurisdiction, is a guilty of bigamy, and shall be punished by a fine of not more than $500, and by imprisonment for a term of no more than five years." At the time Reynolds has already been married to Mary Ann Tuddenham when he married Amelia Schofield. Before this case it was common practice for followers of this faith to marry more than one wife. But this violation of law caused the government and Supreme Court to step in.

George Reynolds decided to fight back. He argued that his religion held him responsible to marry more than one woman at the same time. Reynolds stated "the penalty for refusing to practice polygamy was eternal damnation." He debated that the law in itself was unconstitutional and violated the first amendment. He fought saying that it was his freedom of religion that should allow him to practice polygamy.
Reynolds case was brought before the Supreme Court and even there they held up his conviction. The held up his conviction saying "Congress cannot pass a law for the government of the Territories which shall prohibit the free exercise of religion. The first amendment to the Constitution expressly forbids such legislation….Congress was deprived of all legislative power over mere opinion, but was left free to reach actions which were in violation of social duties or subversive of good order."  During that time congress considered marriage the most important part of the forming of society and they could not let religious belief Coke above the constitution. ​
Powered by