For about a week i used adobe illustrator to create a campaign poster from scratch. I tried different versions of the poster and different layouts. I also used students and teachers to evaluate the posters and what is more visually appealing. 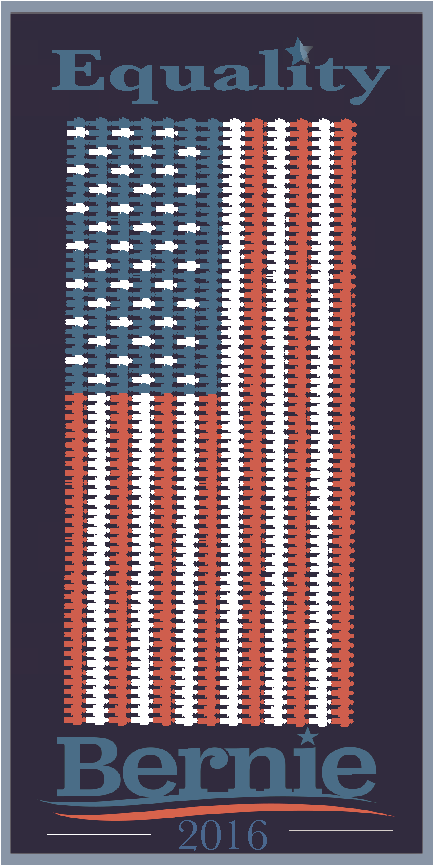 Thank you for inviting me and my family to speak about my presidential views for the election of 2016. For many months I have traveled across the states, and I have met many people that are concerned about the future of America just like I am. The challenges facing our country are enormous, people are working more hours for lower wages, many students can't afford college, and many Americans can't find a decent job. Many generations have been watching America fail to being the land of the free, the land of equality, and the land that has a brighter future. How long will this continue? When will we see the future of our country in good hands. The citizens of America needs a nation that is build on equality for everyone.
Why is 99% of all new income going to the top 1% of the wealthiest individuals? Letting all the new wealth go to the 1% certainly didn’t do any good to America.  Not only are the people at the top grabbing all the new wealth and income while the rest of America is being left behind, but they are getting tax breaks too. I want to end tax breaks for the rich. We need a tax system that is fair, we need to put a tax on wall street speculation so that every american regardless of income can go to college for free. Seven years ago the taxpayers of this country as a result of the greed and illegal behavior on wall street, our middle class, our country,  bailed them out. Now it's wall street's turn to make sure that they help this country so that everyone can go to college.
We can make college free at public colleges and universities, many countries have done it, Germany, Norway, and switzerland. If other countries can take this action, so can the United States of America. Many colleges used to be free  like The University of California. It's system offered free tuition at its schools until the 1980s. The federal government shouldn't make a profit off of students loans, it's morally wrong and bad economics. We can allow students to use need-based financial aid and work study programs to make college debt free.The Sanders plan would require public colleges and universities to meet 100% of the financial needs of the lowest-income students. Low-income students would be able to use federal, state and college financial aid to cover room and board, books and living expenses. I want America to be a place where everyone is proud to live in not just the wealthiest,but also the middle class families and low income families. The American Democracy is supposed to be the foundations of America where everyone is considered part of America and everyone is treated with respect and equality.
America forgot the foundations of American democracy as billionaires rig the system by using their super PACs to buy politicians and elections. Why is big money controlling our politics, I want to bring big money out of politics for the sake of America's well being. The executive, legislative, and judicial branches aren't supposed to be something you can buy so that the government would be in favor of the richest people in America that can afford to spend millions of dollars on politicians.. It may be too late to stop the billionaire class from trying to buy the Presidency and Congress. The forces of greed already may be too powerful, But we owe it to our children and grandchildren to try. One step at a time America can build a strong foundation where the foundation is not just build on the poor individuals so that the wealthy could stand on top and take control, but where equality is the foundation of America, and the wealthy don't control politicians and elections.
These issues are the real issues facing the American people, most politicians and the media just don't want to address these kind of issues that point out flaws in the American nation. What this election should be about, is what our democracy should be about, the debate facing the enormous problems facing our people and infact our entire planet. That is what I intend to be focusing on throughout this campaign. We don’t have to be fooled by this form of discrimination that is being covered by a white veil. I believe in second  chances, I believe that we can build the foundation of America stronger because together there is nothing we can't do. I will take action, to do anything in my hands to bring equality back to this nation, we can work together to turn back this assault on the foundation of our democracy and our future. The future is all in our hands, it's a matter of choosing what you believe in, what you believe America should be about. We need to take action before it’s too late. I want to see change in the lives of people struggling to live the American dream where everyone is treated equally. I believe in America, I believe in a better future,I believe in an equal united nation, I believe in America.Thank you.