Project 2  (Hopefully better then the first one)

Project two is all about gun control. It will cover both perspective on the argument.

Give a boy a gun follows two kids, Brendan Lawlor and Gary Searle, who attend Middletown High School. They are both in the middle of their ninth grade year. The two quickly befriend each other but are both outcasts. As the book progresses its shows theses kids struggling with bullying. They deal with daily teasing and torment. As the bullying gets worse the kids start to snap and have to get revenge at the school dance. The night of the dance Brendan and Gary Show up to the dance with bombs and guns. They enter the dance and lock the doors. They then proceed to make everyone lie on the ground face down on the ground. Brendan shoots the gym teacher and one of the students. Both survive but are critically wounded. As Brendan and Gary tie people up, they notice Allison. Allison has been Gary’s on and off girlfriend. Gary told Allsion not to the dance, since the original plan was to kill everyone in the gym and then commit suicide. As Allison starts to help the gunshot victims Gary starts to question what they are doing, if it is even worth it. As Brendan yells at Allison to stop, Gary turns the gun on himself taking his own life. In the confusion of the moment, a few boys who were able to free themselves rush Brendan. They continue to beat him and eventually put him into a coma.
Give a boy a gun is a book that is meant to raise questions, the questions no one really wants to try and answer. The question of what causes someone to want to kill their tormentors, or even turn the gun on themselves. Is it a the cruel treatment from other kids, or is it the availability of guns. Both of these factors play a part in the book. The combination of bullying and the stress of the situation that caused the kids to crack. These kids felt like they had to take revenge. All of the hatred built up from years of torture finally came out.
When events like this one happen in real life the first thing that comes into frame is mental illness. This is always the go to reason for the cause of mass shootings but if we look at a broader picture it really isn’t. The reason we need gun control is because people can’t handle guns, it’s too much power for one person to have. Just yesterday there was an incident where a 4 year old girl was shot because a driver was angry. The driver pulled up next to the car and started to fire. How many short tempered people own gun, who won’t think twice about gunning someone down in their fit of rage. Not only can people not handle guns, they also don’t properly lock up their guns. Yesterday a 6 year old shot a 3 year old in the head, the boys were playing cops and robbers. The 6 year old grabbed the gun that was on top of the fridge and shot the 3 year old. The kid didn’t know any better. This isn’t even the first time this happened.
There have been multiple occurrences of kids shooting people because guns were just lying around. The gun debate doesn't need to be a debate anymore. How many times do we have to go through a mass shooting to finally take action? They are becoming more regular and we are still stuck in the same debate we have always been in. Look at Australia and Europe, they put a complete ban on firearms and their firearm murders are down to one percent. We don’t need to ban guns but something needs to happen to make guns less available, or limit the number of guns someone can own. We need to take action before another mass shooting happens again.  ​

For my art project I took the waiting times to get guns across the state and translated that into art pieces. I am trying to see if the wait time prevents any gun murders. 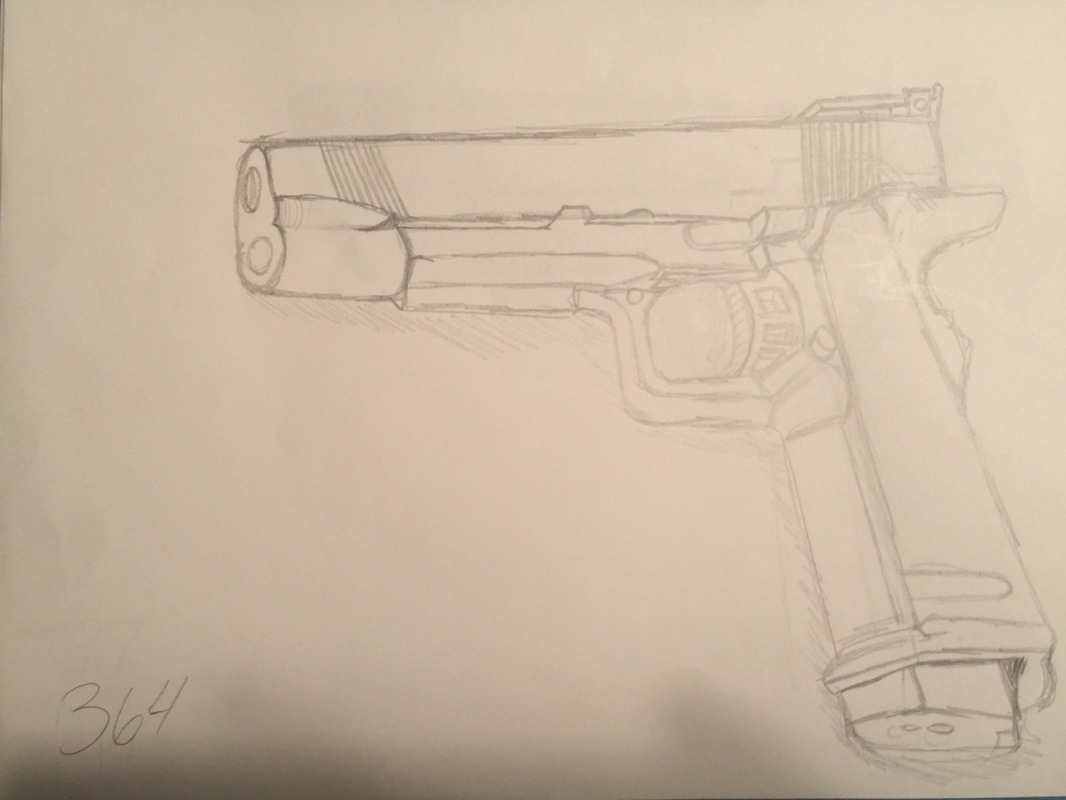 The first state is Illinois, the wait time to get a hand gun is one day. So I gave myself an hour to do a drawing of a gun. The rushed state of the guns represents the the rushed decision to buy a gun. Most people just rush out to buy a gun on impulse. 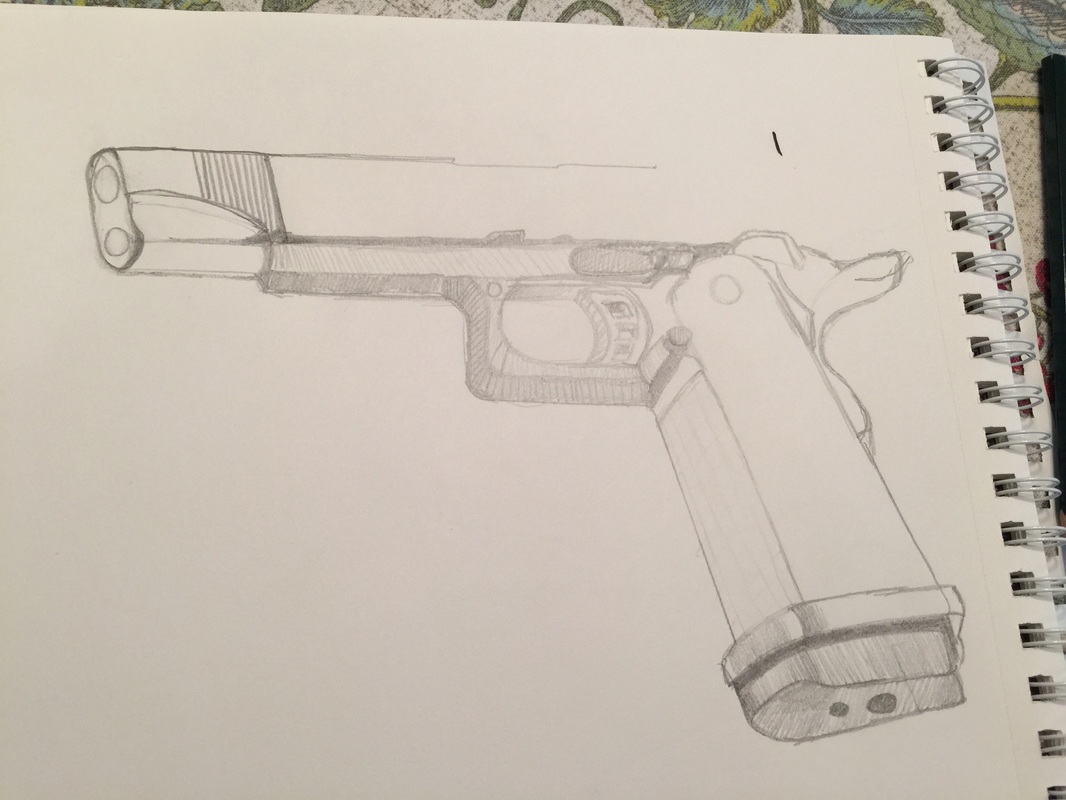 Connecticut has a two day waiting period. So for this drawing I gave my self two hours to draw the same picture. This is what the picture looked like in the first hour. The lines are still a little rushed but you can see that they have more thought put in behind. You see there is much more detail put into the drawing of the gun, showing that it isn't as much of a rushed decision. 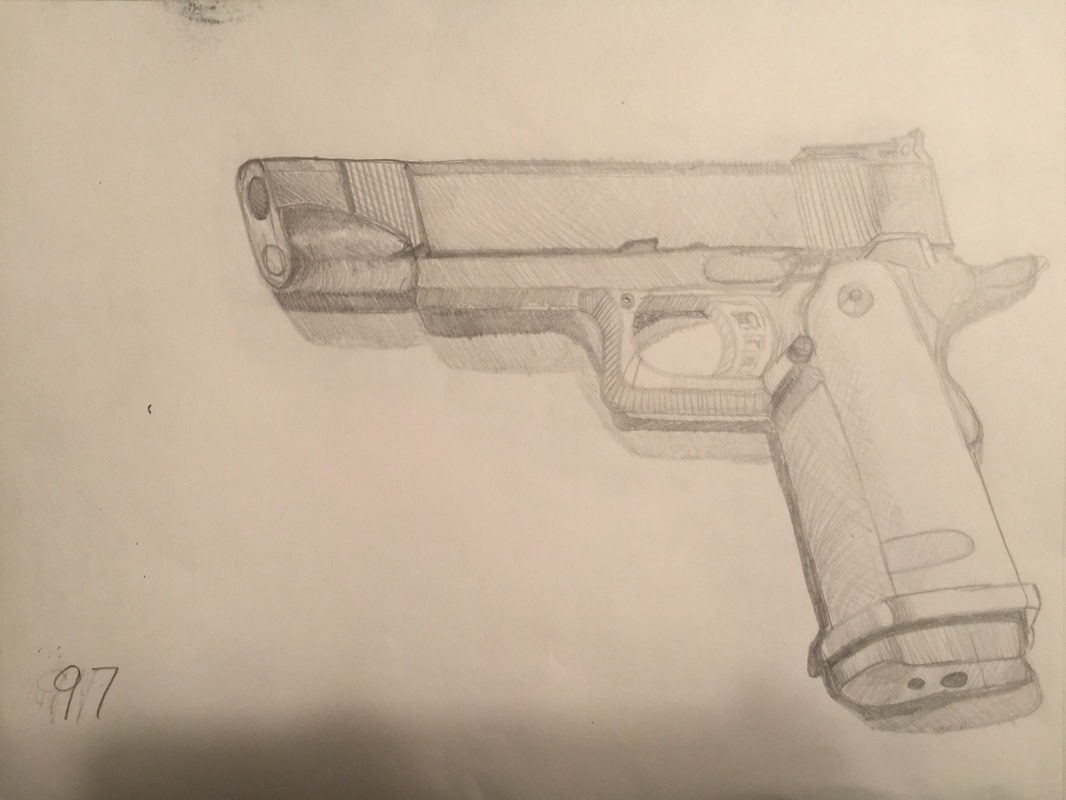 This is the finished product. There is much more detail in this picture but it has a rushed look. This represents that there is still an impulse to buy. A two day waiting period is better but its still not enough time to properly think about your decision.
​ 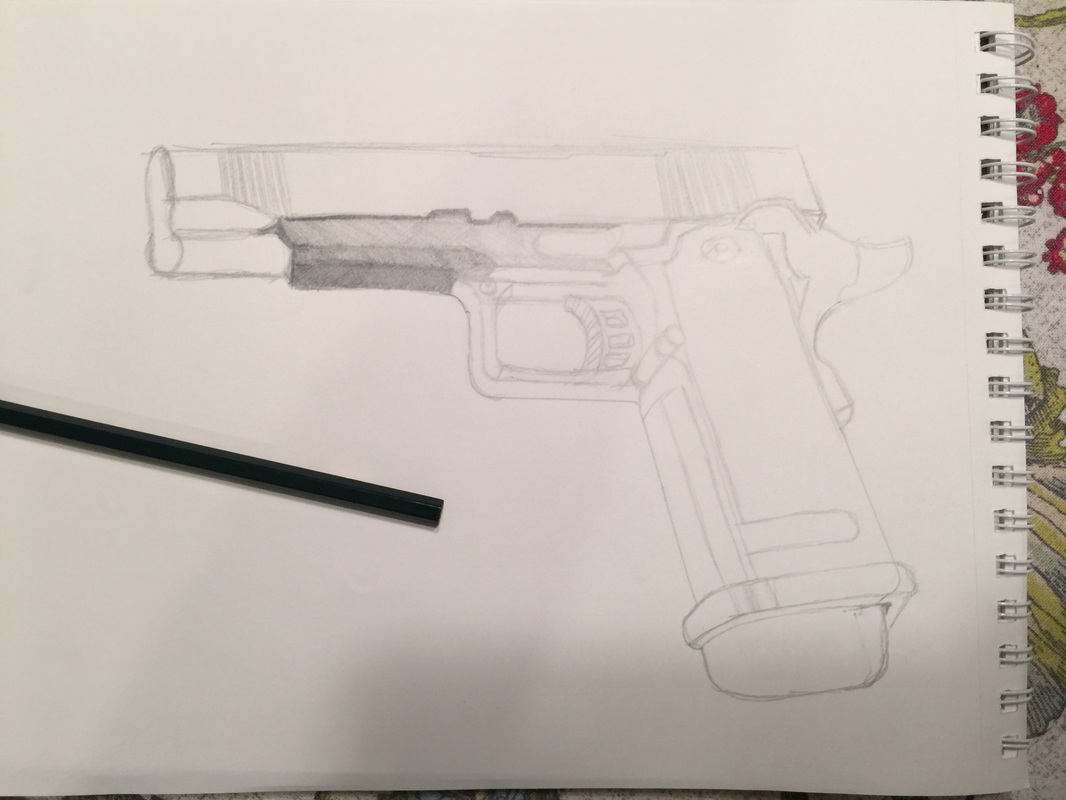 The waiting period for California is ten days. So I gave myself ten hours to draw the same picture. The picture above is the first hour of the drawing. You can see that the gun is developing much more slowly. There is some shading making the gun look round. 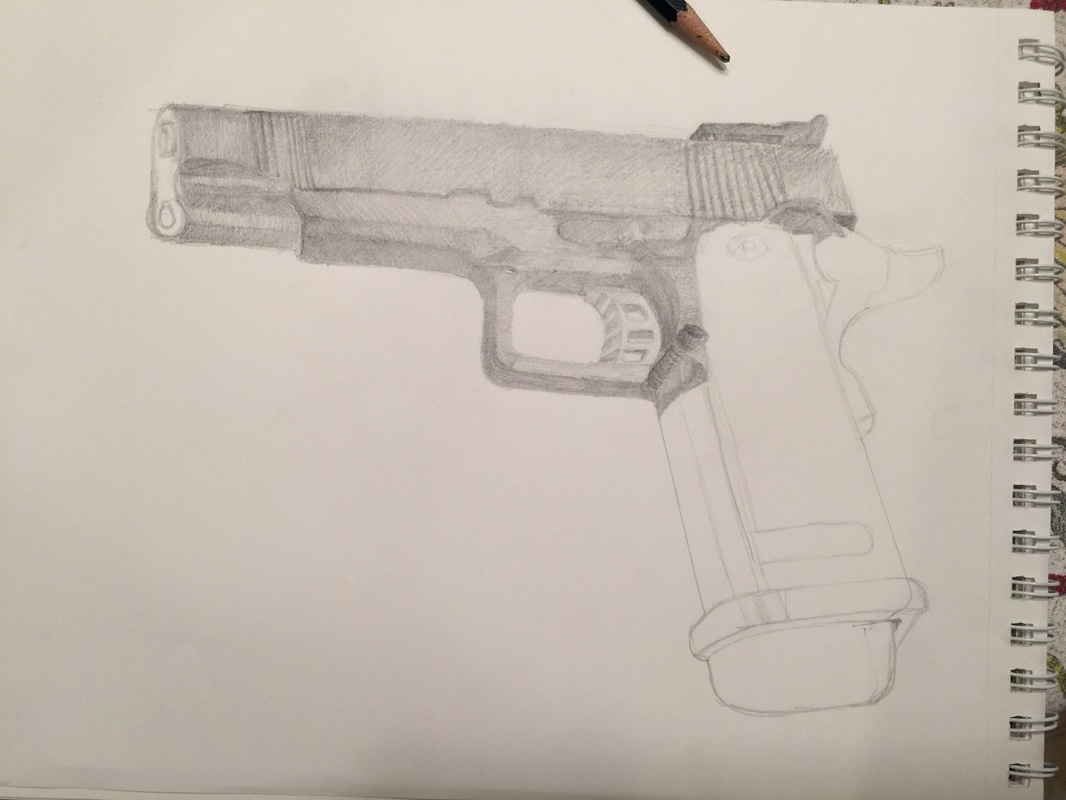 The picture above was taken at the two hour mark of the project. There is much more shading and detail in general then the last two drawings. It is starting to look a lot more like a gun. 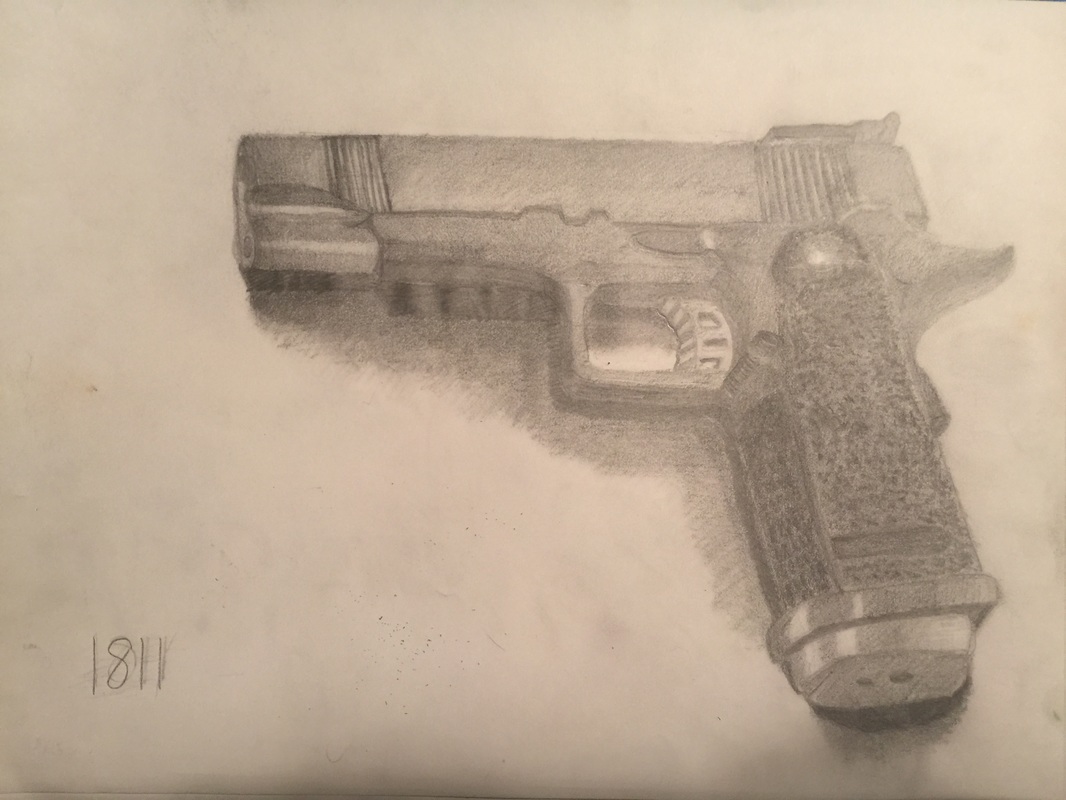 The picture above is the finished product. You can see that there is a lot of thought put into the each line. this represents the amount of time spent thinking about if buying a gun is really necessary. The problem is that even though California has the longest waiting period, it still had the most gun murders in the year 2010. It is very odd that the waiting time had no real effect on the amount of gun murders that took place at their corresponding states. This leads me to my next section of this project.

For my history section I wrote a two commercials both covering opposite sides of the argument. I started by writing a screenplay for the commercials.
Republican:

Dad is dressed in a plaid shirt and jeans, some fancy. He has a yellow cow boy hat            (The camera is over the sons shoulder)
Dad:
Guns are magical things. They make us feel safe, give us a sense of security. Protect us from those pesky intruders.

The kid is at the table pouring a bowl of cereal. He is wearing everyday clothes, a t-shirt and jeans. As he pours the cereal a gun falls out.
(The camera switches to a head on view of the kid)
Kid:
Dad look what I won

The dad sits down and starts eating cereal, very sloppily. He doesn’t even finish chewing his food before he starts talking. Everything in his mouth falls out.
(The camera switches to a head on view of the dad)
Dad:
Good Job son, go show your friends.  Why should all of our guns be taken away just because a couple of mentally impaired people screw up. As an American I have the right to own guns, It says it in the constitution. It’s my god given right and i’ll be darned if I let them take that away from me. The problem isn’t guns, the problem is mental illness in America. So instead of trying to take my guns, you should focus on curing mental illness.

The man is dressed some quality fancy clothes, some real good stuff.
(The camera stays directly on the man for the whole thing.

Man:
Why do we need guns, all they do is hurt people. We say we need them for protection, but what’s wrong with this (grabs a baseball bat) or this (grabs a frying pan). Guns only cause problems for people. They have been glamorized in movies and videogames. Do you know how many people my son has killed in call of duty. TIMMY HOW MANY PEOPLE HAVE YOU KILLED?

The man looks around the corner and yells. You can faintly hear a response.

Timmy:
About 90,000.
The man looks back into the camera
Man:
See, my son is a killing machine, he is a literal one man army. Do you think he has ever thought about what he’s doing,  if shooting people is wrong. He hasn’t, he just mindlessly shoots and kills because he says “it’s fun”. He is so desensitized that i’m not sure if he would react if someone died right in front of him. I’m not saying we have get rid of guns completely, but we have to limit who can buy them and how many they can buy.

Above is my commercial for the democratic side of the gun control debate. The democratic side is a bit weird. They don't want to completely get rid of guns in America (contrary to popular belief). They only want to limit the availability of guns, like the number of guns aloud in the house hold. There is a message in the party that even if you take all the guns away, people will still find away to hurt others and themselves. So instead of completely getting rid of them. We need to properly lock up the guns so that kids can't get to them and limit the number per house hold. We also need to limit the types of guns you can buy, We don't need assault weapons in our homes.

The republican side of the argument essentially shifts all the blame away from guns and on to other problems. The main thing that the argument shifts the blame to is mental health. Anybody who ever gets convicted for mass shootings tries to plead insanity. The Republican side uses this to their advantage and shifts the focus onto curing mental health instead of controlling the distribution of guns. They assume it's their god given right and since it's in the constitution it can't be taking away from them.