This project takes a look at how transgender people are portrayed in the media. When researching this I realized how scarce these characters can actually be. 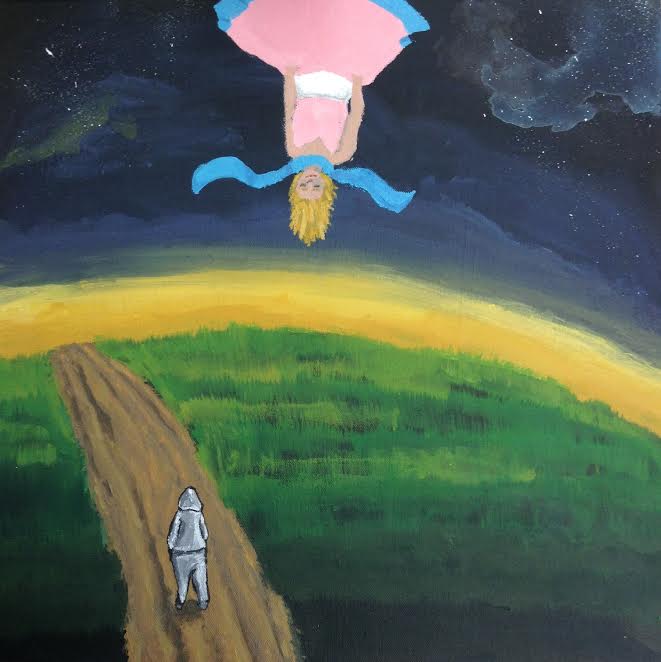 This painting was about  the metaphorical journey of a transgender girl into dreaming of becoming herself. There were supposed to be clouds, but I chose stars over it.

The song is Valkyrie by Savant.

An Error In Luna's Ways

The book Luna by Julie Anne Peters has received high praise due to the fact of raising awareness to transgender issues; however, the book does not accurately tell the details of not only living with a transgender person, but also does not accurately depict transgender individuals as a whole. Peters neglects the use of correct pronouns. Many people would argue that this is because the book is about a cisgender sister of the transgender character. The main character Regan is the younger sibling to the transgender character who prefers to be called Luna. Regan also refers to Luna as having a boy role, her birth name being Liam, and a girl role where she truly identifies as herself. The book raises multiple issues against transgender people without meaning to.
The plot as a whole focuses around Regan's life, and her journey into independence. Luna tends to shine through the cracks, and show us the insight of Luna's impact on Regan, emotionally along with the social aspects of her life. The subplot follows Luna's transition into becoming herself and leaving Liam behind, but in doing so that puts a lot of pressure on Regan to focus around Luna. This is the beginning of a serious problem. It shows that Luna enjoys being the center of attention and doesn't really notice other people as being relevant to her. We, the reader see the world from Regan's viewpoint, as a result we see how this weighs down on her and it gets to the point where she can't function well due to the fact that she has this pressure to always conform to Luna and Luna's goals versus her own.
Luna is described as a genius by the author. Taking up odd jobs from fixing computers and beta testing video games to taking advanced classes. The ending of the book has Luna leaving to begin her transition and saying goodbye to Regan. She is moving out to live with a friend in Seattle, as well as beginning the evaluations for SRS (Sex Reassignment Surgery) and HRT (Hormone Replacement Therapy). The average price of male to female sex reassignment surgery is $7,000 - $24,000. That added to psychiatric and hormone bills is pricey. Furthermore most transgender people make less than the average cisgender person. So during and after, Luna will likely be making less than before.
Not all transgender people get surgeries. There are pressures in certain parts of the transgender community and from outer society that says you aren't transgender unless you have gender dysphoria, and want to change sex due to those reasons. Any transgender person that reads this book will expect the process to be seamless and easy. The book says that once you are financially secure enough you should go for the goals. Which is true, but ultimately it is about the transgender person and what they want. Very flamboyant and wanted every surgery that was available to her. Luna felt like a stereotype. Peters could have gone in better directions.

A Peek into the Representation

Transgender people have been involved in the media for decades. At least the concept of having transgender people in media was. Dating back from  the Ancient Rome and progressing to our modern era. Transgender people and the media have a complicated relationship. The majority of the time characters are played up to be stereotypes or villains. There a broad generalizations for  transgender individuals.
Transgender characters in media can be hard to find. When they are in the media writers don't always script exemplary performances. According to GLAAD (Gay and Lesbian Alliance Against Defamation), "Since 2002, GLAAD catalogued 102 episodes and non-recurring storylines of scripted television that contained transgender characters, and found that 54% of those were categorized as containing negative representations at the time of their airing.  An additional 35% were categorized at ranging from "problematic" to "good," while only 12% were considered groundbreaking, fair and accurate enough to earn a  GLAAD Media Award nomination" ("Victims or Villains"). Negative connotations to characters can affect the demographic that the producers are trying to portray. In attempts to create equal opportunities or humor details can be overlooked as well as forgotten for the sake of plot of the story.
Transgender actors have been in America since the mid-twentieth century. Christine Jorgensen was the first debuting in 1953. She transitioned in Denmark and then returned to the states. Americans marveled at her. She later went on numerous talk shows and had a night club routine. Over time other transgender actors and actresses have appeared; although not considered prevalent until recently. Actors such as Laverne Cox and Tom Phelan have taken up the mantle.
Despite the progress that shows like Transparent and the Fosters, all of the milestones that transgender actors and characters have passed, they continue to face stigmatism. People inadvertently asking personal questions that undermine privacy. Unfortunately the issue remains that these problems are difficult to talk to others about. There is a lack of understanding, and restraint about this topic. People are trying to raise awareness and create understanding. Great news for people who need the coverage, but don't have it. A way to do this would be to have transgender actors, and have realistic expectations of transgender people covered in shows.

Mcquiston, John T. "Christine Jorgensen, 62, Is Dead; Was First to Have a Sex Change." The New York Times. The New York Times, 03 May 1989. Web. 23 Oct. 2015. <http://www.nytimes.com/1989/05/04/obituaries/christine-jorgensen-62-is-dead-was-first-to-have-a-sex-change.html>. An article talking about the first transgender woman of America, Christine Jorgenson, and her impact on society.

Peters, Julie A. Luna. N.p.: Megan Tingley, 2004. Print. Fifteen-year-old Regan's life, which has always revolved around keeping her older brother Liam's transgenderism a secret, changes when Liam decides to start the process of transitioning by first telling her family and friends that she was born a girl who was born in a boy's body.

Unknown. "Sex Reassignment Surgery." Www.sugeryencyclopedia.com. N.p., n.d. Web. 21 Oct. 2015. <http://www.surgeryencyclopedia.com/Pa-St/Sex-Reassignment-Surgery.html>. The information given lists the basic need to knows about SRS. Things such as prices, procedure walk through, to countries that offer the surgeries. The majority of its information is more so for transgender women, than transgender men.