Behind The Nevermind Album Cover:
The baby in the never mind cover represents innocence as well as the new birth of nirvana. Even though nirvana was successful when Bleach was released, Nevermind is what brought nirvana into the mainstream. Kurt knew that nirvana would be changing and becoming a different band when never mind would release, and because of this, it would be the birth of new nirvana. Before the day of the shoot, Dave grohl talks about how they watched a documentary on child birth, and it spoke about water birth. Dave then goes on to talk about how Kurt found meaning in nirvana from that documentary. That's why a four month old baby was used as the main focus on the album, it represents the birth of nirvana's news ideas, music, and popularity.
The band went back and forth on what could be on the fish hook and finally settled on a dollar bill. This, obviously, represents greed in the music industry and it relates back to the baby in a form of innocence. Not only does the baby show nirvana's new birth but it represents innocences, and how even the innocent have greed.

The Story Behind Smells Like Teen Spirit
Before nevermind was released, Kurt was dating the drummer of bikini kill, this caused Kurt to hang out with the singer of the band, Kathleen Hanna. One night both Kurt and Kathleen got drunk and ended up staying at a motel. Kathleen sprayed painted onto a wall of their room "Kurt smells like teen spirit". It was not in reference to anything deep or meaningful but to actually the scene that the drummer from bikini kill left on Kurt. Smells like teen spirit was a deodorant that she wore quite often and the scenes rubbed off onto Kurt, making him smell like teen spirit. Kurt took this as a joke on teenage revolution and that's where the song came from. 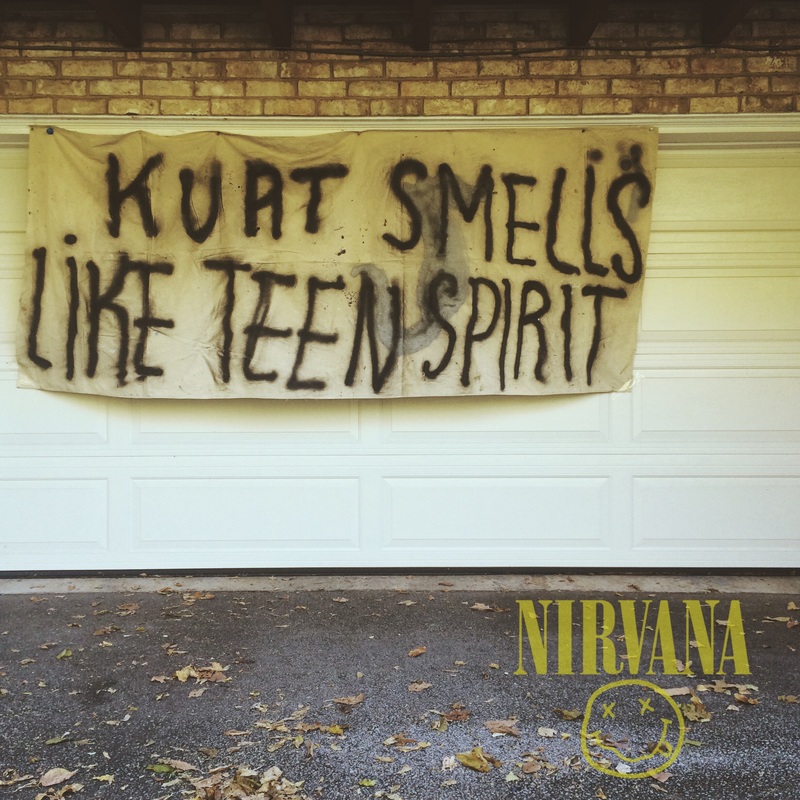 Smells Like Teen Spirit Single Cover
The dirtiness and overall grossness of the actual banner itself. The tarp was never meant to be clean or neat or well organized, just like grunge music. To fully understand grunge music and why it sounded the way it sounded and artist wrote what they wrote, you have to understand where those bands came from. Seattle and Aberdeen, Washington, was usually a very gloomy town due to the weather. The weather wasn’t the only reason artists and bands were emotional, politics played a huge role in many artist’s influences and lyrics. All around, grunge music and the culture surrounding it was not always happy, this affects the way grunge sounded. Bands often had fuzzy guitars and messy bass undertones, resulting in an incredible new punk scene. The grunge scene was very far from clean, prefect, or organized and that’s why the banner is dirty. Nothing in this music era should look flawless and neither should this single album sleeve. Try to picture this same cover sleeve but with a clean white sheet and perfect arial font, doesn’t look right does it? Nothing was perfect during that era of music, this shouldn't be perfect either.
Even though it's painted lightly, the silver outline in the back is a seahorse. The sketch was from Kurt's "read this you'll judge" journals. In this page he talks about birth and how the male seahorse gives birth to the young instead of the female, so how does that all relate back to nevermind? This is because of the entire theme of rebirth throughout the nevermind album cover I spoke earlier on how the baby represents nirvana shirt new birth of sound and popularity. So putting a copy of a sketch on the single album cover, one that talks about birth, is very fitting. The reason it's not very noticeable also relates back to the nevermind album once again. For many who don't know much about the album cover might not understand the the of rebirth, and it will go unnoticed. The same thing will happen with the seahorse here, if you don't look closely you might miss it.
The last symbolism in the cover is the fact that the banner is hung over a garage. This symbol I find very self explanatory but since this is a project for school, I will explain. For a while, grunge music never really made it can o up of Washington state, it was small and the gigs for many of these bands included less than 10 people. Many of these small gigs were at local bars or clubs but a lot were also at houses, in people's garage. That's why the banner is located where it is located, it goes back to where grung grew up in a way. The song, SLTS, could have many meanings to different people, but the majority of the song is just teenage angst. And what is more angsty than playing a gig in your dirty garage while pissing off the entire block because you are playing to loud?

What Effect?
The name of the effect is A6 on VSCO cam and I used it because it gives me a nostalgic feeling. It adds a very warm glow to the original cover and reminds me of the closeness you feel to the people around you at a concert. The warmth you feel in the pit of a concert can be very comforting or very scary and that, once again, relates back to the era of 90's alternative music. A lot of people found Grunge's lyrics and sound to be very comforting to what they were also dealing with, but at the same time a lot of people found it very scary and thought these bands were doing nothing but screaming instead of singing. That's why the album cover looks warm and comforting, because for me, grunge is a comfort.

What Does This Piece Represent?
In every article I read about Kurt Cobain, they always focused on the negatives aspects of his existence. These things include, his stomach issues, his drug addiction, his mental illnesses, and of course, his tragic suicide in 1994. This always confuses me because Kurt Cobain was a very bright a beautiful human being and deserves to be remembered in that way. That is what this digital art piece aims to show, not only that kurt wasn't just another tortured artist, but not everything in grunge was sad and angry. As a matter of fact, the grunge era shaped many artist now and made what the alternative scene is today. Not to mention the affect grunge music and lyrics had left on the teens of that generation.
The use of bright colors and shapes are a way to bring out the beautiful aspects of Kurt. He was a creative mind, he could write/record an entire song in a couple hours. Kurt was funny, now it is obvious I never met the man because he died before I was ever born, but based on what his friends and family have said, he was very funny and sarcastic. Kurt was a very caring human being. He usually came out after shows to meet fans even though he was usually very tired. He loved animals and at one point during his career owned a couple cats. Kurt Cobain is not his suicide.
​