(or creationism vs evolutionism) 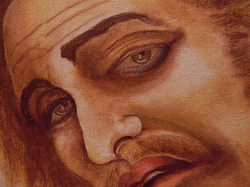 As someone who is agnostic, (feel free to look up the definition, basically means someone who doesn't necessarily believe in God but doesn't disbelieve either) I wanted to take at a look at the different sides of this argument, the theme being Ideologies and Conflicts. I started out with the basic research and such on both sides, from there I went deeper into more of the sorts of historical events that went down that involved science and religion. Then I did some art stuff and things because I like art stuff and things.
I also may or may not have been behind on this project.

This is the Social Studies aspect of the project, going back to earlier, this is a historical event that occurred in 1860. What makes this event special is that two people from either side of the debate hit heads, not literally of course.
Imagine this as an epic wrestling match and I'm the commentator guy.
On the science side, we have Thomas H. Huxley, and English biologist, also known as "Darwin's Bulldog." Coming in at and unknown amount of pounds since why would that be important, he follows in Darwin's footsteps with his theories and is on the side of evolution.
On the religious side, we have Samuel Wilberforce, with a last name so long that I almost always say it wrong, is the bishop of Oxford, and his plan is to thrash and smash Darwin and Huxley's theories.
Long story short, these two guys were angry at each other, yelled in front of a huge crowd, and then I wrote a paper on it. Feel free to check it out.

As someone who is agnostic, and also more science-sided (I like space stuff) I wanted to see what people who were atheist had to say about the bible. So what I did is take a look at the science related things in the first part of the bible, Genesis, and pointed out some scientific errors. Once again I will state that I am agnostic, and not atheist, although the way I wrote this paper does make it seem like so. I just ran short on time.