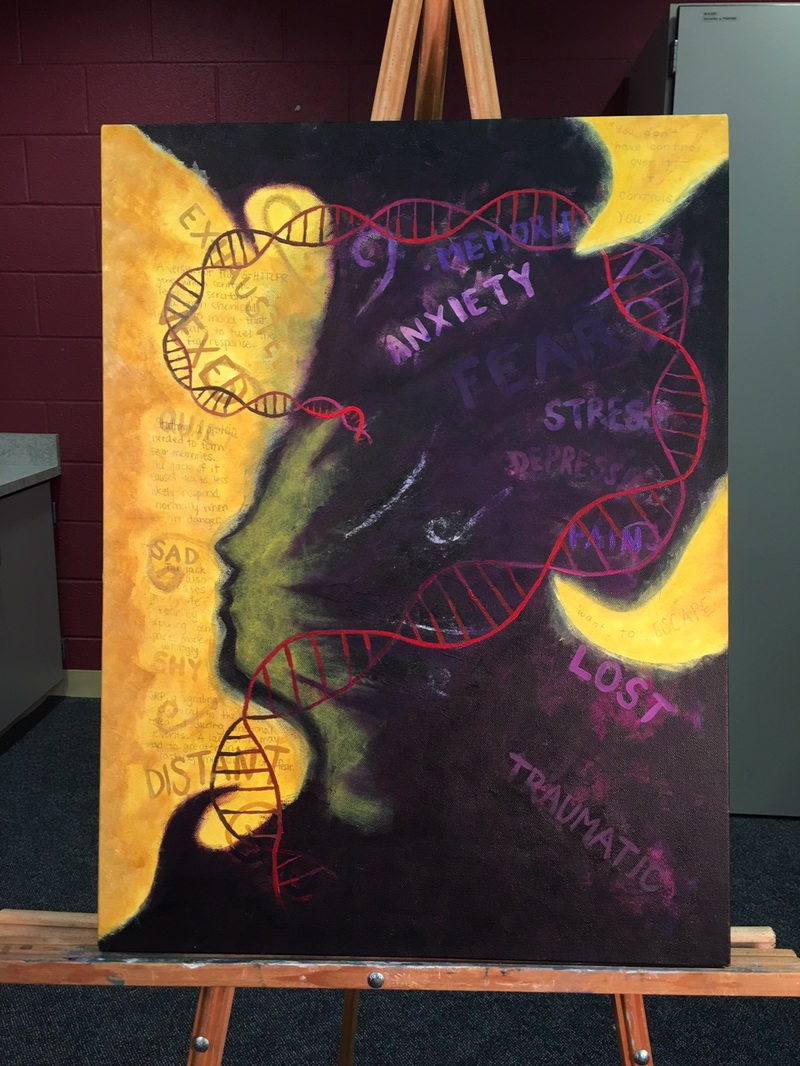 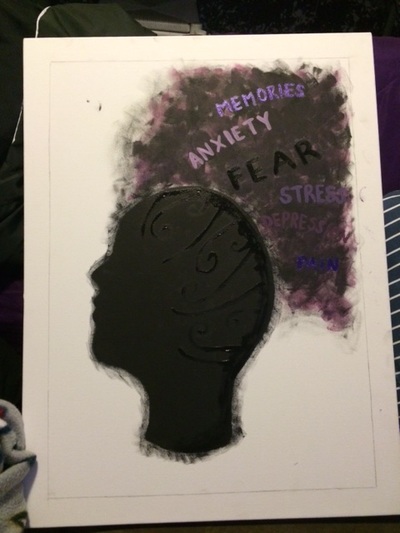 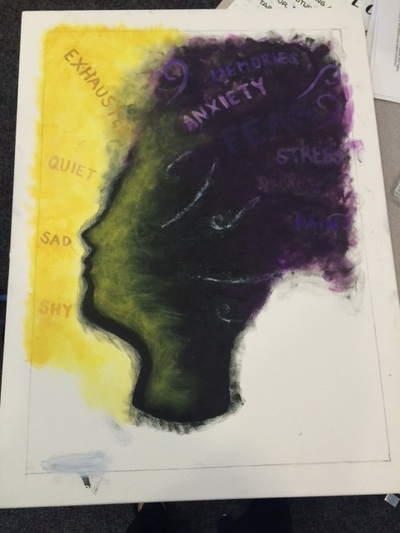 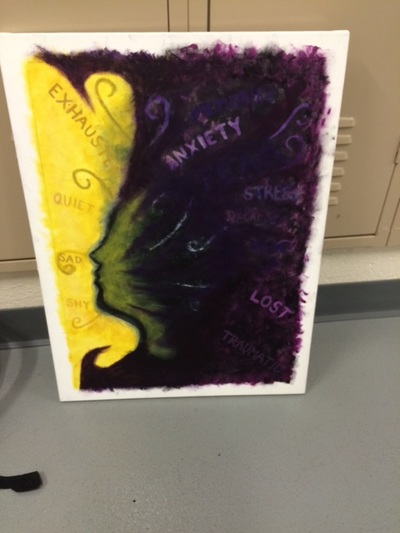 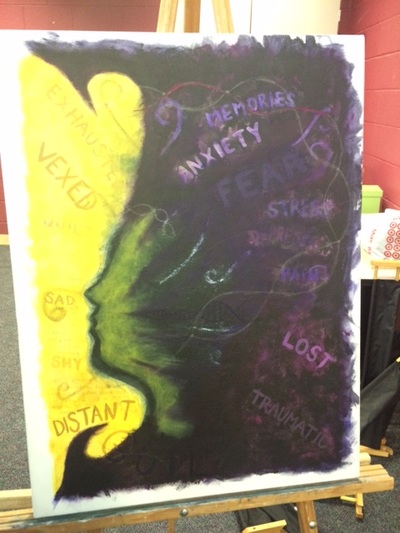 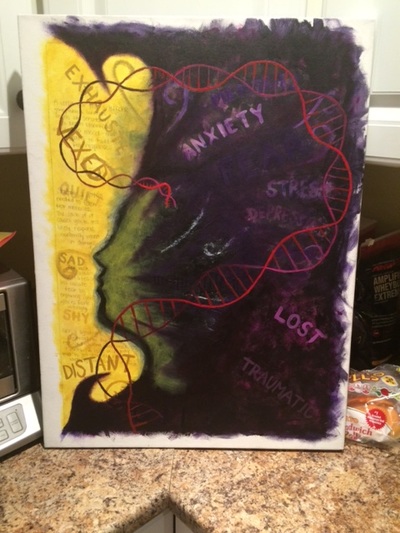 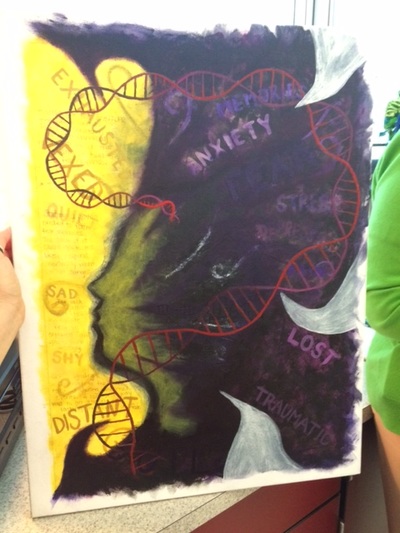 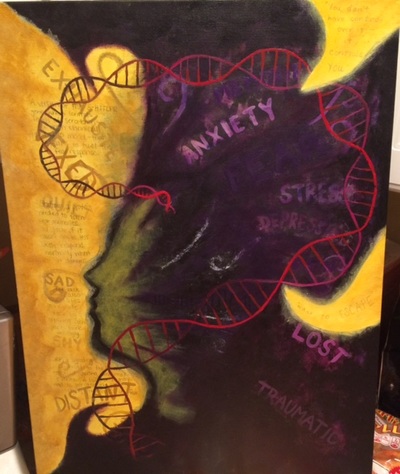 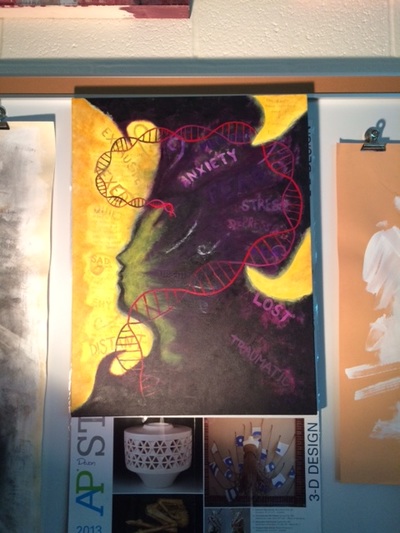 This painting represents someone with PTSD in general, but also more specifically, my step-mom.

I chose these colors because they compliment my theme and I feel as though they are very powerful colors.

Acrylic paint is my favorite medium to work with. I used make up sponges to represent how we use make up to mask our imperfections.

This color scheme goes well with my project because my step-mom’s favorite color is purple and its complimentary color is yellow. 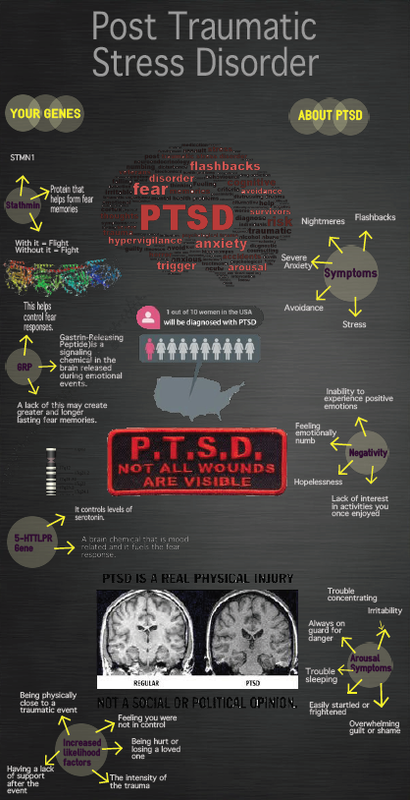 “You must have been dealing with a lot of emotions, huh?”
“Yeah, definitely the guilt, fear in multiple ways, and  I get spooked easily. If I’m at work or at home, and if lights are on and doors are shut, that triggers all of that. Say if my daughters are gone for the weekend or if one of them just left. If somebody forgot to turn the light off in the bathroom upstairs, knowing that they all left and my husband is downstairs, well who’s in the bathroom?”
“Well who or what has been most helpful to you along the way?”
“My husband has put up with me. He understands me when I feel like nobody else does. He tries to help me, but it’s hard to help someone in this situation. Sometimes I just have to go to my special spot by myself that no one knows of. I go there and think even though I don’t always know what I’m thinking about.”
“That’s great that he’s there for you and can help you in some ways.”
“Well I guess but the depression and anxiety kinda unintentionally interfere with relationships, so it’s hard for him to help me. And this may just be me, but sometimes I feel like other people are judging me because it’s been so hard for me. When the police were there and I was all frantic, the officer looked at me and  said, “You’re a nurse, you’ve seen dead people before.” He didn’t understand though that it wasn’t the dead person that freaked me out. In one sense it was but it was more so the situation. You don’t understand why it happens. I used to work in the emergency room and I’ve been around the trauma before. I’ve seen dead people before but it’s just a crazy circumstance. You just don’t have control over it-- it almost controls you. People don’t understand. It’s not that I choose to be this way. It’s not that I don’t want to get better. It is what it is though and I’m trying to get help.”
“I’m glad that you have been putting in effort towards recovering though.”
A voice came over the intercom stating that my stop was next. I begin to gather my belongings as Nadine wraps up her story.
“I guess what I’m trying to say is that-- what’s kind of ironic is that right around the same time this happened with me, one of the guys who comes in to do preventive maintenance for us, had a situation with himself. He found a lump on his head and ended up being off work for  3-4 months. He came back and he was so freaked out about the whole situation. His boss and I talked and he said you know, “People just can’t judge how a person reacts to a stressful situation.” A lot of times, PTSD has to do with previous traumatic experiences. You don’t know how many it can be until PTSD is triggered. In talking with my therapist, there was physical, emotional, and verbal abuse with my ex. And my son almost died a couple times. My therapist said that with each traumatic experience, it’s that much harder to bounce back. It’s the whole idea of the unknown. You don’t know when it can happen or what will trigger it.”
Nadine paused, and took a deep breath. “I never really understood post traumatic stress disorder until I was diagnosed with it.”
“Alright Nadine, this is my stop. I wish we could continue to talk. I really appreciate you opening up to me and sharing your story. Maybe if you still find yourself riding the rails when I’m ready to head home, we will meet again. ‘Till then Nadine.” She looked up at me with the saddest eyes but softest smile and pleasantly said, “I’d like that.”