Supernatural is one of my favorite TV shows. But what is Supernatural?
​
To me Supernatural isn’t just an unhealthy TV show addiction; well, mostly. It’s a story of two very close brothers who would quite literally end the world than lose each other. Of course they have their disagreements, but they always stick together, them vs the world. The Winchester brothers were brought up by their father, John Winchester. When the brothers were young their mother died in a mysterious fire that engulfed their home. Well, it wasn’t so mysterious, their mother was on the ceiling, burning, as a yellow eyed demon fed Sam his blood. John became depressed and wanted answers to explain and find closure in how his wife had died. This motivation sparked into a passion to hunt down the paranormal, yes, paranormal, like ghosts, demons, angels, shape shifters, and a wealth of unholy creatures.
Moving hotel to hotel, from case to case, John raised the brothers on the road. They frequently changed schools, and were left alone in motels not knowing where their father was, or when he would return. When they got older, John would bring the boys along on hunts, which eventually turned them into hunters as well. At some point Sam wanted to get away from the hunting life and attended college for criminal justice, while Dean remained committed to his father and figuring out what had happened to their mother. After some time, Sam got brought back into hunting, and the trio literally started stirring up Hell. 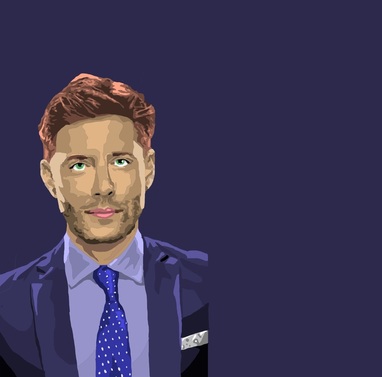 For the Art portion of my project I delved into the vast community that surrounds the series. There's hundreds of incredible 'fan creations', but there was only a few that truly stood out to me. I knew I wanted to create a portrait, but I didn't know in what style I should've done it in. Polygonal portraits are basically portraits made up of polygonal shapes with differing color values. I didn't like the sharp edges, so I resorted to making the shapes more organic and round. I've made portraits using the style before, but I always did them in black and white, while this time I used full color. I used a program called Adobe Illustrator to create the basis of the portrait, and for the rest I transferred it to my iPad and used my Wacom stylus to make smaller details. I cataloged my process with pictures, which can be seen below in a slideshow.