What exactly is Vodou?

​     Among one of the most misunderstood religions of today is Vodou. Many people, upon reading that word, conjure up thoughts of barbaric animal sacrifices and needles lodged inside of Voodoo Dolls. What about those Vodou witches who practice black magic? Hollywood has managed to create its own "religion", called Voodoo, by featuring movies and TV shows that expose the public to misconceptions about Vodou. Thank you, Hollywood, but I think I can handle it from here on out.

The Holy Bible... Well, Not Exactly

Now, you might be thinking to yourself, Why in the world is there a Bible on this page?  I promise you, it was no mistake. Believe it or not, many followers of Vodou identify also as Catholics, too. Historically speaking, this double identity makes a lot of sense. Vodou was actually created by marrying the beliefs of Native American religions, West African Vodun, and European Catholicism.
Africans that were transported to the Caribbean islands during the Transatlantic Slave Trade brought along their religious beliefs. As the colonists of St. Domigue (modern-day Haiti) were Catholic, they banned any religious practices that were not associated with Catholicism. The Haitian slaves faced persecution for practicing Vodou, so the slaves were forced to resort to practicing in secret. Vodouisants then began to parallel Christian holidays with Vodou holidays and associate Chrisitan Saints with the Vodou spirits called Lwas.
It was this syncretism with Christianity that inspired me to create the Vodou Bible featured above. On the outside, the book looks like any other Bible; on the inside, however, it is apparent that this book is like no other Bible. There are three parts to my book: the poems, the sketches, and the prayers.
The first part of the book features four pieces of poetry that I created. Each poem is written from a different perspective than the others. Often the views expressed about Vodou are exclusively those portrayed in the media; with my poetry, I wanted to give a voice to the practicers of Vodou as well as allude to why many people perceive Vodou in a negative light.
​     The second part consists of three sketches that are intended to tie into the historical aspects of Vodou.
The first sketch is of a skull and an apple. Vodou altars consist of traditional religious symbols (like crosses and rosaries) along with more contemporary items that act as offerings and mediums for the spirits. Common items include skulls, fruit, alcohol, desserts, flags, and candles. To appease God and the spirits, these items are present and replenished often. I also like the irony of having a symbol of death next to a fruit from a living thing as another way to emphasize the differences in the perception and reality of the religion.
The next sketch is covered by a gold cross. This gold cross is covering my sketch of a traditional Vodou doll. Because Vodou was banned from being practiced by the slaves in the Caribbean, Vodouisants had to find clever ways to continue practicing their religion without getting caught. Not only does the cover mask the contents of the book, but so does the golden cross. The fact that the Vodou doll mimicked the shape of the cross once again put an emphasis on the syncretism that Vodou embodies.
The tea light candle and the glass of water in the last sketch represent the prevalent ritual that Vodouisants perform during ceremonies. It is common practice to have a simple glass, purely reserved for ceremonies and prayers, full of water alongside some small candles before a prayer is said. These items are intentionally simplistic so that the follower is able to focus solely on respecting the Lwas rather than focusing on any of his/her physical surroundings. As Our Father, Hail Mary, and Apostles' Creed  are recited, three drops of water are poured to the right, the left, and around the center of the candle. Vodouisants believe that this water around the candle invites the spirits to interact with the real world. Papa Legba, the "gatekeeper" to the spiritual world called Vilokan, is always called upon before any other spirits can be contacted. Essentially, Papa Legba is the medium for communication between the physical and spiritual world. It is after all of this that the specific spirits may be summoned.
The final aspect of my book features the three prayers vital to conducting a successful Vodou ceremony. Our Father, Hail Mary, and Apostles' Creed  are traditional Catholic prayers that are also crucial to Vodou. I decided to include both the English and Haitian Creole versions of each prayer. As Vodou is most prevalent today in Haiti and New Orleans, it made sense to include these prayers in the two languages that correspond to those locations.

La Sirene in the Sea

Along with my book, I created a painting of the Lwa, La Sirene. This Lwa is the spirit of the ocean and moon. Many depictions of La Sirene include trumpets, mirrors, combs, and sea life as these are items that describe her personality (vain, playful, beautiful, mysterious). Her long black hair adds to her beauty, further characterizing her. Vodouisants associate her with blue and white and offer her foods like cake and rum. It is rumored that La Sirene drowns people as punishment, too. To describe La Sirene in terms of Greek mythology, I would say that she is a mixture between the goddess of love, Aphrodite, and a siren.
I began by analyzing the types of Vodou art. I found that a traditional Vodou art style is to embellish flags with sequins and beads. Because these pieces were sewn, the art lacked the depth and dimension that other art forms offer. I wanted to take the common symbols in these flags and use them in my own artistic interpretation of this spirit. It was by observing various Vodou flags that I got inspired to paint.

Art That Inspired My Painting 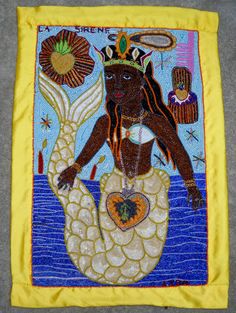 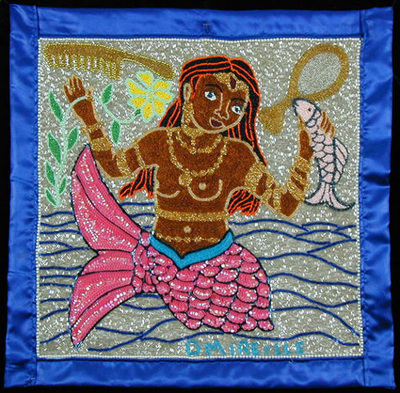 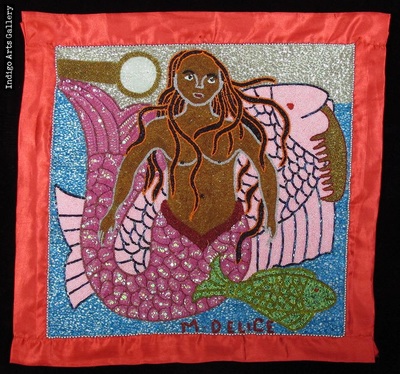 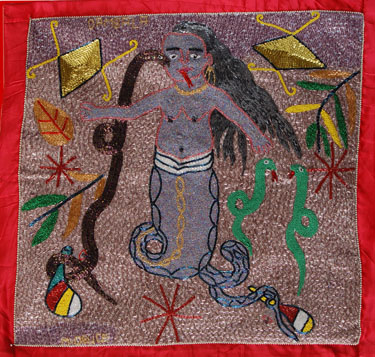 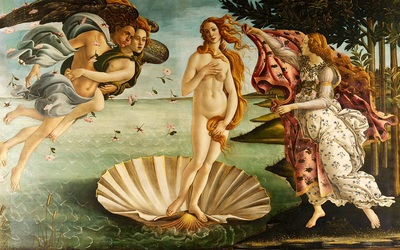 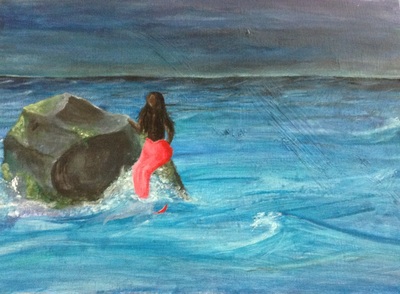 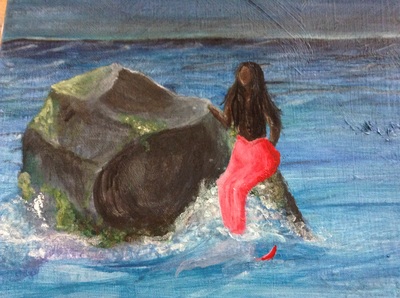 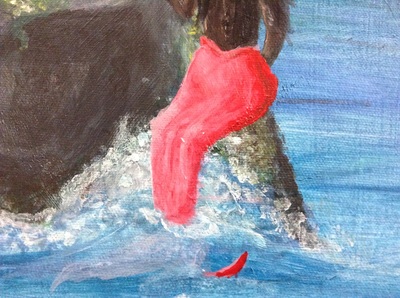 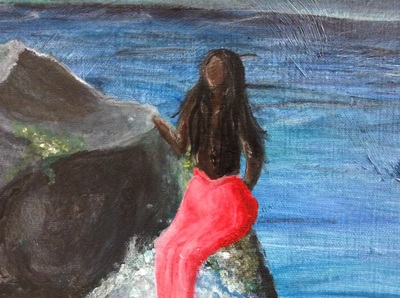 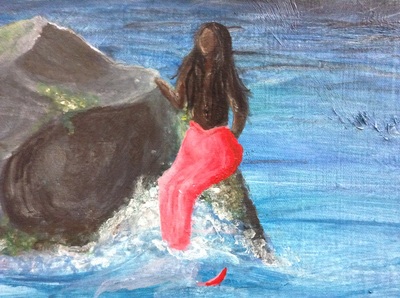 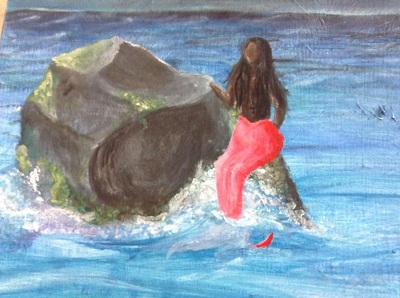 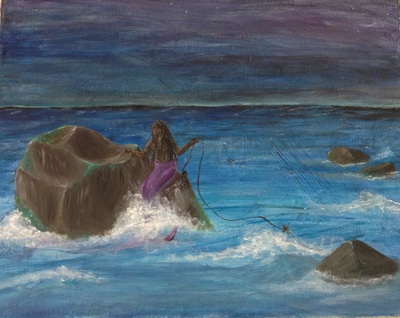 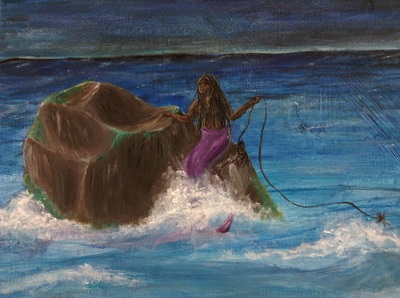 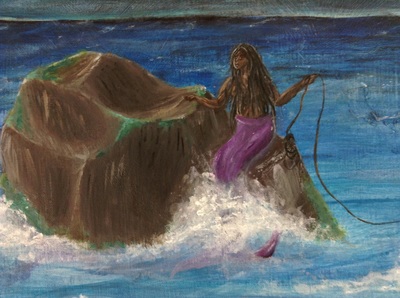 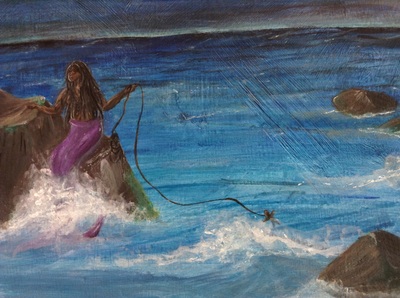 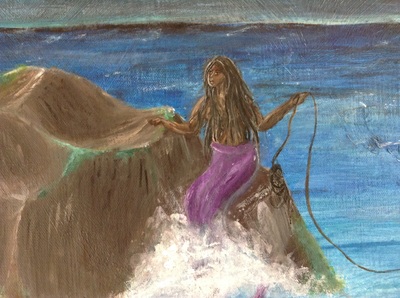 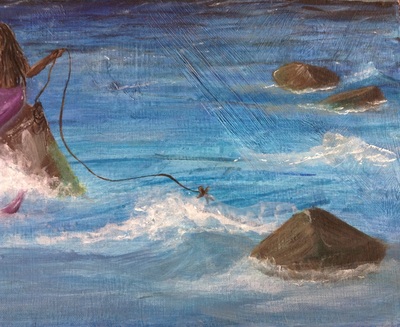 It Isn't Just Paint on a Canvas

After analyzing the work of other artists, I was ready to begin creating my own painting. As she is the spirit of the sea and is associated with blue, I began by roughly painting an ocean scene to act as the backdrop to the focal point of the piece. La Sirene is known to sit on a rock among the waves, so I wanted to incorporate that, too.
Along the way I received a lot of constructive criticism from the teachers and my peers about the overall appeal and my technique; as someone who has never taken any art classes beyond elementary and middle school, I could use all of the help that I could get. To create a more natural aura with the palette of the piece, I added browns to the rock(s), added the rocks themselves, incorporated more blue hues into the algae, and changed La Sirene's tail to be purple.
It was after I had made these changes that I decided to finish my piece with La Sirene holding a rope tied around a drowning Voodoo doll. La Sirene drowning the Voodoo doll is an analogy for the truth behind the Vodou religion. People educated on the topic of Vodou are all encompassed by La Sirene. The suppression and harsh treatment of the Haitian slaves is represented by the rope. This rope is constricting the Voodoo doll, mirroring how the slaves were constricted when they were sold like property, mistreated, and executed for their spirituality. This Voodoo doll is intentionally very small. You see, this minuscule Voodoo doll compared to the vast waters of the ocean represents the prevalence of misconceptions in Vodou as a whole. Annoying as these negative connotations are for Vodouisants to deal with, the spirits and the traditions of the religion remain untouched. These misconceptions that Vodou involves sorcery, witchcraft, cannibalism, and satanic worship are wrong, and as punishment, La Sirene is drowning the Voodoo doll.
*Disclaimer: The word Voodoo is used to refer to the mainstream and misrepresented religion fantasized by Hollywood, whereas Vodou is used to refer to the religion (primarily in Haiti) incorporating Catholicism, African Vodun, and Native American spirits.
Powered by